This year, the Sherbrooke Research & Development Center, in Sherbrooke, Quebec, Canada, is celebrating 40 years of continuous innovation in the field of materials research. As part of that, two Pyrotek employees were recently honored for their specific contributions and decades of dedication going back to the very beginning of the center. 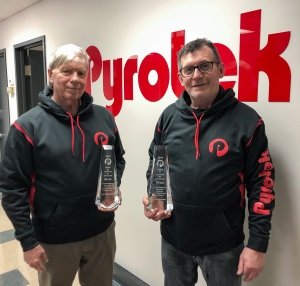 Luc Desrosiers, the Assistant Director of R&D Projects, and Pierre Grimard, a Research Technician, were there when the center was just being established. They have contributed to many of its accomplishments since then, says Alain Simard, the Director of R&D in Sherbrooke.

"It is a pleasure to honor their exceptional dedication and to be able to count on their immense knowledge of the center," Simard says.

Today, the center specializes in R&D of products and technologies for Pyrotek's aluminium, foundry, glass, steel, and hearth divisions. It is equipped to test chemical and physical properties of materials supplied by Pyrotek.

In 1979, the center was founded as a spin-off from the University of Sherbrooke. It was known as CERAM and was owned and operated by the government of the province of Quebec. The center became independent under the name CERMINCO in 1993, when Pyrotek was a client and had representation on the board of directors. It was in 2004 that the Sherbrooke R&D Center entered the Pyrotek family, when the company acquired 100 percent of the shares.